The mayor of Thessaloniki, Mr. Yiannis Boutaris, welcomes the construction of the Holocaust and Human Rights Museum

Thessaloniki paid a very high price for the Nazi brutality. In the worst repercussions of this brutal reigning, 74 years ago, a large proportion of our citizens -the overwhelming majority of this city’s Jewish population- was deceitfully and violently forced to a «trip» without return.

As the first citizen of Thessaloniki, I warmly welcome the construction of the Holocaust and Human Rights Museum, which we are planning to establish during a crucial moment: it is probably our last chance to collect valuable information, as few Holocaust survivors are still alive. Having realised this significant opportunity for our city and our country as a whole, we join forces with TRAINOSE, the French Institute and the Israeli Community of Thessaloniki in order to accomplish this great project.

The Municipality of Thessaloniki has consciously and consistently worked for the preservation of the memory of our Jewish fellow citizens who so tragically lost their lives from the Nazi ruthlessness. As a part of this effort, we decided to establish the Jewish walk, organised every March in remembrance of our compatriots who were forced to embark on the first train heading to Auschwitz.

The Holocaust Museum will constitute a vibrant research center concentrating on Jewish studies as a whole and on the past of Thessaloniki’s Jewish community in particular. It will be in the service of researchers in Greece and the Balcans, as well as in Europe and the entire world. I am confident that this evolution will considerably enrich our historical knowledge and shed additional light to events that deserve more of our attention. At the same time, it will comprise an important educational center for teachers and students of all grades. It is of the outmost significance for us to transmit this knowledge to future generations.

I honestly wish and hope that this innovative museum with its prospective scientific and educational activities will soon become our own Yad Vashem. 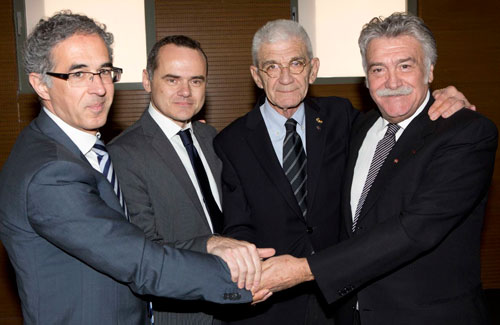