The Minister of Foreign affairs of the Federal Republic of Germany, Dr. Frank Walter Steinmeier, inaugurated the exhibition “Divided Memories 1940-1950- The distance between history and experience”

The Jewish Museum of Thessaloniki participates with a separate section, which includes historic evidence (records – photographs), films and projections of documents, divided into three parts.

Following the inauguration of the exhibition, Minister Steinmeier was proclaimed an honorary member of the Jewish Community of Thessaloniki, in a ceremony at the Monastiriotes Synagogue. Upon his arrival, Dr. Steinmeier visited the exhibit of religious artifacts that is kept in the Synagogue and lit a candle in memory of the 50.000 Jews from Thessaloniki that perished in the Holocaust.

The German Minister of Foreign Affairs, during the ceremony that was held in the only surviving prewar Synagogue, which became the center of Jewish life after the war and was recently restored using funds donated by the Federal Republic of Germany and the Herbert Simon Family Foundation, mentioned: “For me it is a moment of great joy and gratitude to be received, today, as honorary member of the Jewish Community of Thessaloniki. No, in fact it is something much more: a miracle! A miracle of reconciliation. A miracle realized by the hand of man- by your hands, dear community, that you hold out towards us, the Germans, welcoming the German Minister of Foreign Affairs in the center of your Community.”

“We accept the hands you are extending with great joy but also with humility. And be sure that we will never let go of those hands” he noted, underlining that “without a doubt Germany acknowledges its political and moral responsibility for the murders and the heinous crimes committed in Greece during World War II.”

Addressing Mr. Heinz Kounio, who is a Holocaust survivor, the German Minister said that it is impossible for him to imagine what Mr. Kounio felt upon his return to a city that the Nazi deprived it of its Jewish identity, having seen earlier, in Auschwitz, a lot of his fellow members of the community passing in front of him on their way to the gas chambers. But as Dr. Steinmeier stressed, “the hate and the rage of the Nazi did not manage to completely destroy jewish life in Thessaloniki, which the survivors managed to revive with “strength and love”.

Dr. Steinmeier expressed his gratitude that the Jewish Community not only extended a hand to Germany, “but the German hands are able to contribute to the life of the community”, through various projects, like the restoration of the Monastiriotes Synagogue or the Summer Camp that hosts Jewish youth from Greece, Israel, Germany and other countries.

He characterized his visit an “unforgettable moment”, saying that “there are not many moments like this in the life of a Minister of Foreign Affairs” and for that he thanked the Jewish Community.

Mr. Saltiel made a reference to the “wide spectrum of initiatives” that are realized by Germany in support of Jewish life in Thessaloniki and in Greece in general, mentioning especially the Holocaust Memorial Museum and Human Right Educational Center “ a project of monumental value that will contribute to the combat against anti-Semitism and which will be presented in a few days to the German Parliament, given that it is actively supported by the Federal Republic of Germany.”

Apart from the Mayor, the ceremony was attended by Mr. Kostas Karagounis, New Democracy MP, the Ambassador of the Federal Republic of Germany, Dr. Peter Schoof, the Consul General of the Federal Republic of Germany, Mr. Walter Stechel, the Consul General of Romania, Mr. Martin Salamon, the Honorary Consul of Canada, Mr. Pantelis Petmezas, The Honorary Consul of Italy, Mr. Christos Sarantopoulos, the Honorary Consul of Spain, Mr. Samuel Nahmias, the Presidents of the Jewish Communities of Larisa, Volos and Trikala and many members of the Jewish Community of Thessaloniki. 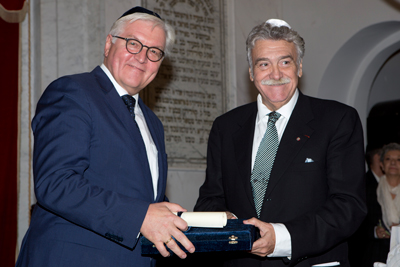